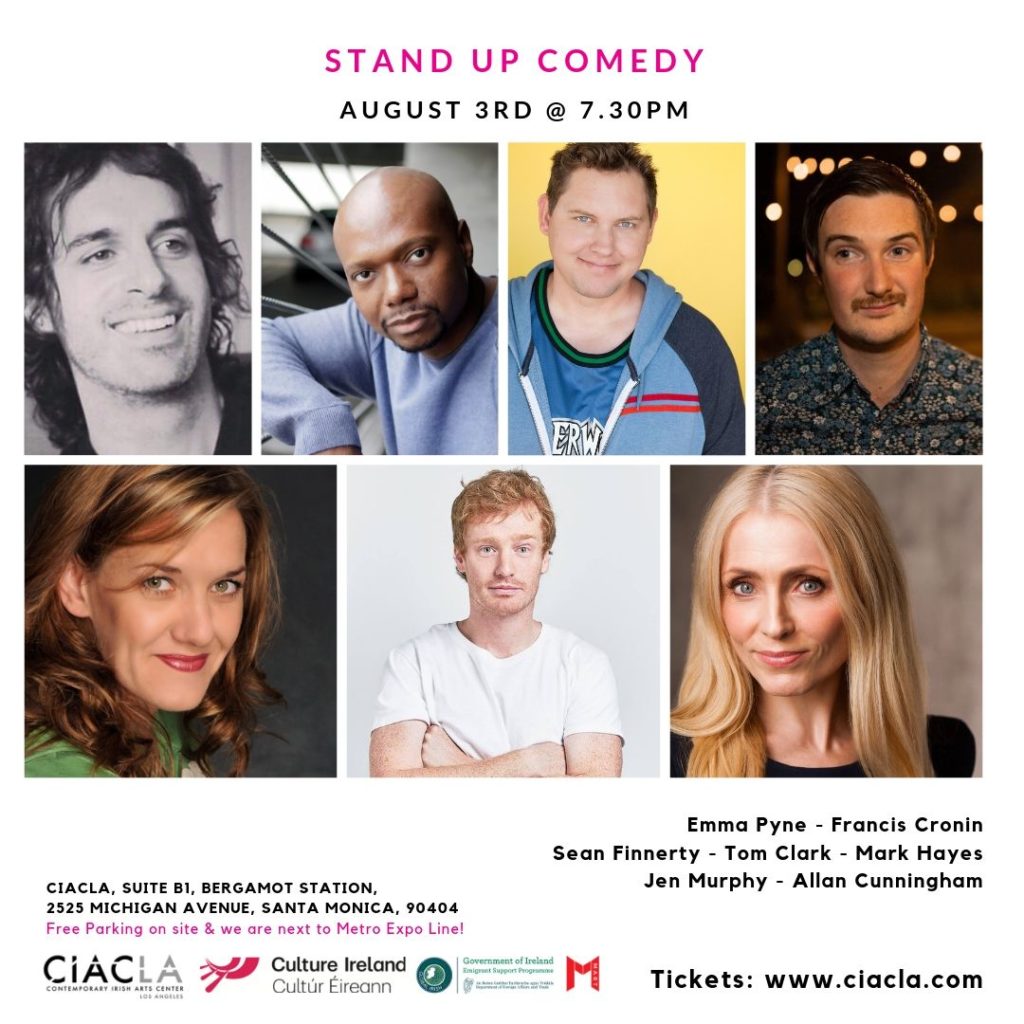 Emma Pyne hails from County Clare. She began writing comedy in 2006 and performed with a sketch group at the Edinburgh Fringe Festival in 2007 and 2008. She is an award-winning actor, trained at The Lee Strasberg Institute, and recently starred in the film Angels On Tap, with Ed Asner, Jamie Farr and Marion Ross. She has performed standup in New York, London, Edinburgh, San Francisco, Arizona, and in LA at The Comedy Store, The Hollywood Improv and Flappers. She hosts two monthly comedy shows in LA, one called Throwing Punches and another called Laughing Cat.

Francis Cronin is an Irish born and raised comedian, actor, writer, producer and ex-Irish army officer. In 2012 Frank won the ‘People’s Choice Award’ at the WAFF Awards and was nominated for an ‘Outsider – Person of the Year Award’ in 2013 for his comedic documentary series about living in a tent for his entire final year of university. He has performed in front of crowds from 50-5000. He wrote the hit Irish comedy series ‘The Boys’ and wrote and starred in BlackPills’s ‘SuperHigh.’ Francis has made numerous TV appearances in Ireland and America and you can catch him on Fox’s LaughsTV. Francis is currently working with SNL alumni on beyondthecomics.com and starring weekly in Equal’s Three viral sketches which garner over 50 million views a month globally.

Sean Finnerty grew up in Longford, and moved to the U.S. at the age of 21. He recently became the first Irish comedian to perform on the Tonight Show with Jimmy Fallon (2019). In 2013 he was selected for Comedy Central’s Up Next competition and was a semi finalist in Florida’s Funniest Comedian (2014) resulting in him opening for WWE hall of famer Mick Foley. In 2015 he make his television debut as co-host of Fireball Run on Amazon Prime, and was selected to perform at the Boston Comedy Festival. He moved to New York in 2016 and quickly became known as ‘one to watch’. Recently, he performed at festivals Laugh Your Asheville Off (2017)  Edinburgh Fringe (2018) and Electric Picnic (2018), and made it to the semi finals of the nationwide talent search Stand Up NBC. Sean has also developed a reputation as a Roaster and is currently the number 1 ranked roast comic in New York City.

Mark Hayes has been dubbed “Ireland’s craziest and wittiest comedian and writer, a poet at times.” Saying that he has also been called the “runt of Irish literature” so take your pick. He is the author of three books including RanDumb: The Adventures of an Irish Guy in LA which was number one on Amazon Humour, he also writes a weekly column about life in LA for the Irish Examiner. Mark runs his own weekly show every Friday night at the Laugh Factory and can be found performing all over LA and around the country opening for Chris D’Elia.

Jen Murphy is an Irish American comic from California. She has been featured on Gotham Comedy Live on AXS TV, Comics Unleashed on ABC, Last Comic Standing on NBC, and Laughs on FOX. As well as performing at clubs, she has also done three military tours to Afghanistan, Kuwait, Jordan, Egypt and Greece to perform for the US troops.

Tom Clark was born and raised, in that order. He has performed stand up on such shows as TBS’s Conan, CBS’s Late Late Show, The Bob & Tom Radio Show, and Comedy Central’s Premium Blend.  His  stand-up special “Outraged” is available on iTunes and Amazon. Clark is also an actor and has appeared on such shows as HBO’s Room 104 & Euphoria, NBC’s Outsourced, TNT’s The Closer, and the Hallmark made for TV movie The Wish List. After landing the role on Outsourced, director Ken Kwapis invited Clark to be in the Drew Barrymore movie, Big Miracle. You can also see Clark in Columbia Pictures Freaks of Nature. www.tomclark.com

Allan Cunningham is one of the last great storytellers. His laid-back demeanor allows him to paint a hilarious picture so vivid you can hang on the wall. Off stage you can catch him mastering his craft as an actor, director and writer. He is currently the face of antidepressant Rexulti seen on all major TV networks.